Here’s a little tip for anyone who owns a Sony PRS-505 eBook reader.  It has a couple of expansion slots on it for an SD card and a Sony Memory Stick Pro Duo, and whilst these are intended to allow you to expand the number of books you can carry around there’s a bit of extra functionality you can draw upon here. 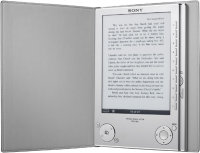 Most users of the PRS-505 will charge it from their PC through the mini-USB connection.  Now if you’re quite mobile you’ll probably charge it from your laptop.  The PRS-505 however appears as a mass storage device when you connect it to your PC and this means that the expansion slots also appear as storage devices on your PC.  In Windows this means you will see three drives - one for the PRS-505’s onboard memory and one for each of the two expansion slots.

So if you don’t have built in card readers on your PC, the PRS-505 gives you access to these types of cards.  Handy in a pinch - maybe?