Since Google Notebook went out of development earlier this year I’ve made the migration over to Evernote. It has many cool features one of the coolest being the ability to upload images and have Evernote run OCR to index the content of the image.  The mobile phone Evernote applications allow a phone’s camera to be used to take a snapshot image and to upload it to Evernote over a 3G connection.  Unfortunately the Windows desktop application has no functionality for capturing images in the same way through a web camera and with the proliferation of netbooks I feel that this is a feature that is sadly missing - well for me anyway.   So after a bit of research I embarked on a quick weekend VB.Net project to put together a little application that could do this - and so I created “SnapIT”. 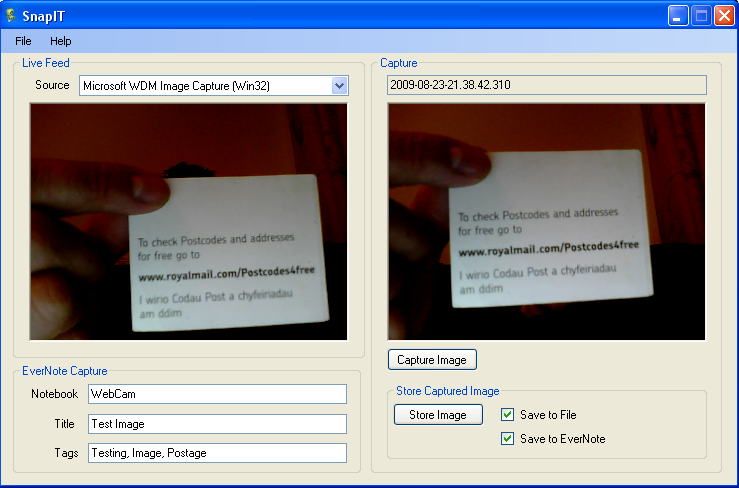 SnapIT allows you to take a photo with an attached or built in camera (by pressing the “Capture Image” button) and save it (by pressing the “Store Image” button) to a specified folder as a JPEG with a file name based on the time at which it was taken.  It also allows you to send the image off to an Evernote database with options to specify which notebook it gets sent to (it will of course default to the default notebook), a title and tags (separated by commas).  Where the image ends up is determined by the checkbox options that have been selected (next to the “Store Image” button).

It’s a standalone executable and stores a few settings in an INI file it creates in the same folder.  When you first use it (assuming you want to save images or send them to Evernote) you will need to set a few file/folder paths.  This can be done from File > Settings.  You need to set a folder to store images in, the location of ENScript.exe (used to send the image to the database) and the location of the Evernote database file to which images should be sent.

This is just something I threw together for my own use and given that I wrote it in just a day or so it really hasn’t gone through much testing, so please keep that in mind when using it.  That being said if you find a bug then let me know and if I can reproduce it I may just find the time to fix it and post a new version.