I usually read manuals before using something, but in the case of my iPod Touch I pretty much dived straight in. However I recently took the opportunity to have a look at the online help within Safari and came across the instructions for using the undo operation. I think I might have accidentally used the undo function before but never realised how to activate it. 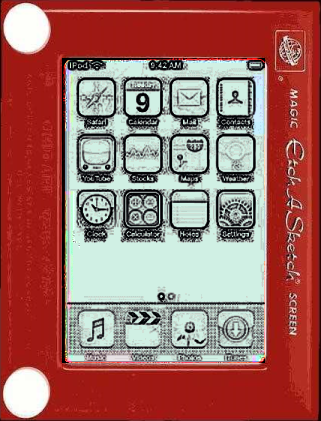 The trigger is apparently to shake the device - which reminds me of a the Etch-a-sketch I had as a child. I’m not sure how universal this was but I can’t think of any other reason why Apple might have decided that this was a good way to undo.

Describing an arc across the keyboard in an anti-clockwise direction would work in a number of cases as this corresponds to the arrow icon normally used to identify this function. Then a clockwise arc could actually allow them to include a redo function. This would get around the odd little shake you have to do for me.

Whilst the 3.X operating system’s redo operation only currently works for typing the option to undo other actions where a keyboard isn’t displayed is also potentially viable. So how could Apple incorporate a redo function? Well it would make sense to use the accelerometer again (to keep it gesturally linked to the undo), so I’d suggest rotating the iPod (/iPhone) so that it is turned face down and back again.

Of course there are two way to do this - about the long axis (left/right) or the short axis (top/bottom). So if you were Apple what would you write into the operating system for this “spare” gesture?