Over the weekend, Evernote have announced that they have a secret to share on July 14 2010 at 10 AM.  So I guess the big question is what is the secret and are elephant’s good at keeping them?

Since Saturday several blog posts have popped up around the Internet making reference to an e-mail they have sent to ‘some’ of their users relating to the secret.  As you may know I’m a huge Evernote fan and user but I haven’t yet received one of these mails.  The absence of any blog post or even a thread on the Evernote forum is rather conspicuous so I might be tempted to disregard this as a hoax except for something that happened a few months ago.

Phil Libin (CEO of Evernote) was having a public Q&A session (read my summary post - The Future of Evernote in 2010) and I asked him what feature he was most looking forward to.  His response was “The *second most* important thing that I’m looking forward to in 2010 is accessing shared notebooks in the downloadable clients. This is coming to iPad / iPhone first, then to all the other ones. The *most important* thing that I’m looking forward to is still a seeekreet, for the next few months, but stay tuned.”  This could very well be THE secret to which Phil was referring.

The e-mail contained a stylised note which read as follows: 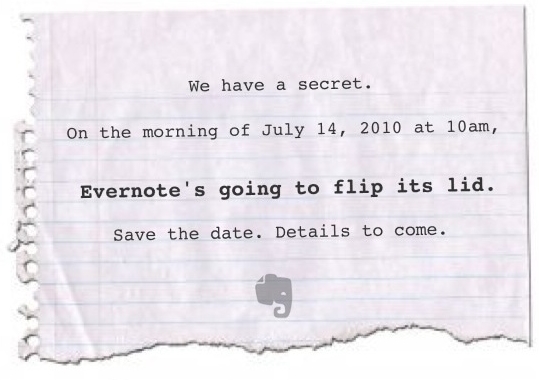 We have a secret.

Evernote’s going to flip its lid.

Save the date. Details to come.

The line in bold is certainly our first footprint and clue towards what this is all about.  Why else would it be in bold and be phrased unusually.  Everything else is direct - this line has to be a teaser.

Researching the phrases of lid flipping gives all sorts of reference to butt kicking and craziness.  Either of these could apply to Evernote’s plans with regards to offering a feature no one else could beat or just plain offering loads of extra stuff in general for free.  However Libin’s allusion to the secret being a feature would suggest that this could be more of it being some sort of new functionality.

I also wondered if the reference has to do with some sort of storage or containment.  My thoughts were immediately drawn to cloud storage like Dropbox or Box.net.  But these are areas that Evernote wouldn’t quite match to. It takes a different approach to file storage that is tied directly to its core concept - embedding files in notes.

Flipping the lid could be simply a release of something or de-capping.  Whilst Evernote could theoretically lift the upload limit I don’t think this is likely.  The freemium model is working too well and the size limits are probably one of the key threshold features to convert users to premium (though SSL encryption of note traffic I know is being considered for release to free users - if the financials work out).

Unfortunately one footprint doesn’t make a trail.  The “Details to come” might yet yield a second footprint and surely other rumours might begin to appear in the coming weeks.  So keep your eye out for an elephant in a bar who might leave a clue behind.  I’ll certainly be keeping a closer eye on the forums, Evernote related Twitter feeds and the Evernote blog over the next few days as I’m still a little surprised to see nothing there so far.

What do you think the big secret might be?