A rat is a small mammal with a bad reputation. The R.A.T. however is a fighting system that has a similar reputation in that it has been used to train US Navy Seals amongst others. It is a system that is focussed on survival in dire circumstances and certainly isn’t something I’d recommend to someone working the doors as a way to safely escort people form the premises. Last weekend I had the opportunity to give it a go at a seminar in Catterick. 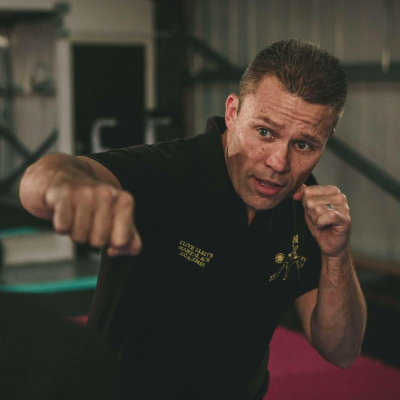 The seminar was being taken by my Defendo instructor Clive Elliott at the Progressive Martial Arts facilities. The day was split between Defendo and the R.A.T. and I was intrigued to experience what it was like based on Clive having mentioned some of the training techniques in other seminars.

After a delayed journey due to heavy traffic I excused myself and joined the class during the verbal introduction. We began in earnest by practising a defensive posture that involved having the arms raised above the head. This reminded me a little of Muay Thai but with the arms even higher. The principle was simply one of blocking any high line shots to the head with the elbows. The technique was based around an engagement distance suitable for identifying the attack in plenty of time and not being close enough to engage in grappling. This seemed relatively effective for straight attacks, but less so for round house / swinging punches. That being said they are typically slow enough to allow you to move and line up the elbow appropriately. We all found we had a temptation to try and strike the attack with the elbow, but the principle erred more toward lining it up and having a direct contact or a glancing blow. The result of contact was not only one of protection but also to inflict pain on the attacker and so gloves were worn for this.

To defend against low line attacks from a similar distance, the knee was simply raised (I couldn’t help thinking Karate-kid and the crane stance for this). Here the idea was that the knee would function in a similar manner to the elbow. This stance did effectively negate attacks to the groin due to the “clamping” protection from the raised leg, however I do feel that this left me significantly unbalanced and the jitsuka in me was not comfortable with this approach - but I’ll try most things once. Again the practise involved shin guards though I forewent these based on previous experience of having my shins hammered during school PE and the level of ability and control of my training partners.

Next came the retaliation where the range had been closed or the situation escalated at a shorter distance. The principle here was to apply constant pressure against an opponent to force a collapse in defence and posture. This “straight blast” certainly drew parallels to some jiu jitsu ku zushi principles, but in a particularly violent and aggressive manner. This was one of the most fun elements of the day. After donning head guards, and gloves we got to get some sense of what the pressure felt like of being ‘straight blasted’ but without the pain. We also got used to applying the pressure whilst pushing an opponent back using gloves. Whilst both had a fun element to them this was quite serious stuff and gave me an element of better understanding having never been rained upon with sustained blows to the head in the same way in any previous training.

I do have my reservations of how close that actually is to being real. I fully accept and encourage the safety elements, but from the point of view of the person applying the straight blast I’m not sure I could sustain it for long before injuring myself. The good principles of a punch go out of the window a little and I’m not trained in any boxing styles. I did wonder if sloppy technique at that rate might lend itself to separated or broken knuckles?

After that the technique progressed to finishing the assailant off. Here a combination of three elbow strikes, a descending head butt and a knee to the groin would surely finish off anyone but the hardest of foes … so much so that I did question what everything after the first elbow was for.

There was some discussion of ground fighting and this was served by another element of the R.A.T. which seemed to orient around biting your opponent. Clive talked through some of the ideas behind this and how he was not covering anything today that would cover the ground fighting elements sufficed to say that he felt some of the biting techniques were too extreme a measure for anyone outside the military to need. I agree to an extent from some of the colourful description and comment he gave (read bite to kill and disable here). If you do find yourself on the ground, biting can often help to get a release - just bite somewhere soft and bit hard and that should help loosen a grip.

Overall it was an interesting seminar and I gained some useful insight, but I’m not so sure its a system that I can really make best use of … and that’s probably a very good thing.