An Elegant Solution for Snapshots in Evernote on the iPhone

The latest release of Evernote for the iPhone is 3.3.5 and it includes an elegant yet simple solution for what was previously a frustrating oversight around taking photos.

I unfortunately do not possess an iPhone (only an iPod Touch), but my other half has just upgraded from a 3G to the new iPhone 4 (the screen is as good as they say).  She has been kind enough to loan it to me for a few minutes so that I could check out something from the latest Evernote update - the “image handling improvements” and it was certainly worth a quick check. 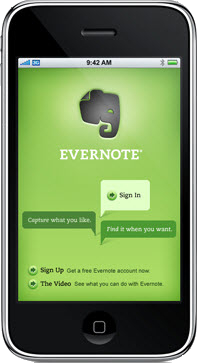 Now obviously my iPod Touch allows me to use images in notes, but the one thing it lacks is a camera (maybe we’ll see a change on this in the next few months).  I wondered if there was any improvement around the “live” image capture - notably the oversight that the photos taken in Evernote could not be rotated when adding to a note.  Taking images of business cards and the like thus had to either be edited on a desktop app or by snapping to the iPhone camera roll, rotating and then importing into a note.

My suspicions have pleasantly been supported in my little experiment.  I tried taking photographs in both portrait and landscape.  Evernote’s ‘Snapshot’ note entry was able to detect the orientation of the phone and then insert the image into the note in that orientation.  Simple and elegant - no need to manually rotate, just point, click and done.

I’m surprised that this wasn’t listed more specifically as a feature in the release note (copy available here) as I’m sure it has caught out quite a number of iPhone Evernoters in the past.