Not every problem is black and white (but this one is)

I recently had a technological Wizard of Oz moment where I was having a problem with a piece of video equipment. That is I had a black and white image from a web camera where there had previously been glorious technicolour. Given the amount of time I invested in resolving the issue I thought I’d perhaps share it in case anyone else comes across the same problem.

In one of our meeting rooms at work we have a ceiling mount video camera. This is linked to a desktop computer and is occasionally used for things like Skype or recording bits of footage from a presentation. I don’t use it often but I had popped in to double check on the set-up for just such a use the following week. Unfortunately my quick test revealed that I was only getting a black and white image from the camera. I set-about testing a few things such as updating the Windows drivers, checking the software settings, trying a different camera and plugging the camera into a different computer. This narrowed the problem down quickly the conclusion that the Belkin F5U228 was the problem. 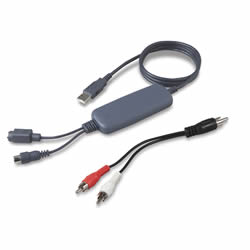 This little box of gadgetry and and cables takes an analogue video feed and pipes it into a USB port on your computer. The drivers then convert the data stream into a digital image - in this case a rather grey one. In this case the software for setting the driver settings was proving to be the issue. After some digging around I found that the feed was being defaulted to NTSC rather than PAL - which is more the norm in the UK. So an easy fix - just set it to PAL. Well it would have been if the software actually worked. No matter what I did to apply or OK the change (and I tried on more than one PC), it would not accept the change.

The solution therefore was a little registry hack. Now it isn’t totally straight forward as every time you plug this device into a new USB port it creates a whole new branch in the registry to contain the settings. So because I’d tried in several USB ports, I had to change several sets of settings. But anyway, here’s how I did it, oh and before I forget - as ever if you hack the registry you do so at your own risk!

Step 1
Open your favorite registry editor. If you don’t have one, don’t worry, Windows has one built in, just press WIN+R to bring up the run dialog, type in REGEDIT and hit enter.

Step 2
Navigate to HKEY_LOCAL_MACHINE\SYSTEM\CurrentControlSet\Control\Class\{6BDD1FC6-810F-11D0-BEC7-08002BE2092F}\. This is where you should see one or more four digit numeric entries (e.g. 0002). These relate to the settings created when the Belkin F5U228 is plugged into different USB ports, so you may need to expand each of them and make the following updates to each to get things working.

Step 3
Under the numeric entry, you are looking for a \Settings key. Select this and you should see a list of settings.

This solution worked for me so hopefully if you’re experiencing similar problems this will work for you too.