With the second release of 2018, SAP SuccessFactors is releasing a handful of notable updates for Employee Central Service Centre (ECSC).

We begin with a confirmation that the enhancements for GDPR compliance are now fully in place and that there is provision for deletion of employee records. Previously there was difficulty around this in that tickets had to be associated with employees and the tickets themselves provide an auditable record of activities that is also in effect a knowledge base of resolutions that can be accessed within C4C by the similar tickets search function.

The Data Protection and Privacy work centre now provide functionality not only to report on employee data held within C4C but also, functionality to remove it. An employee can be selected for removal and once the job runs to purge the user’s record, which takes a few minutes, the tickets associated with that user get assigned to a special dummy employee record.   An employee with a ticket is set for purging: 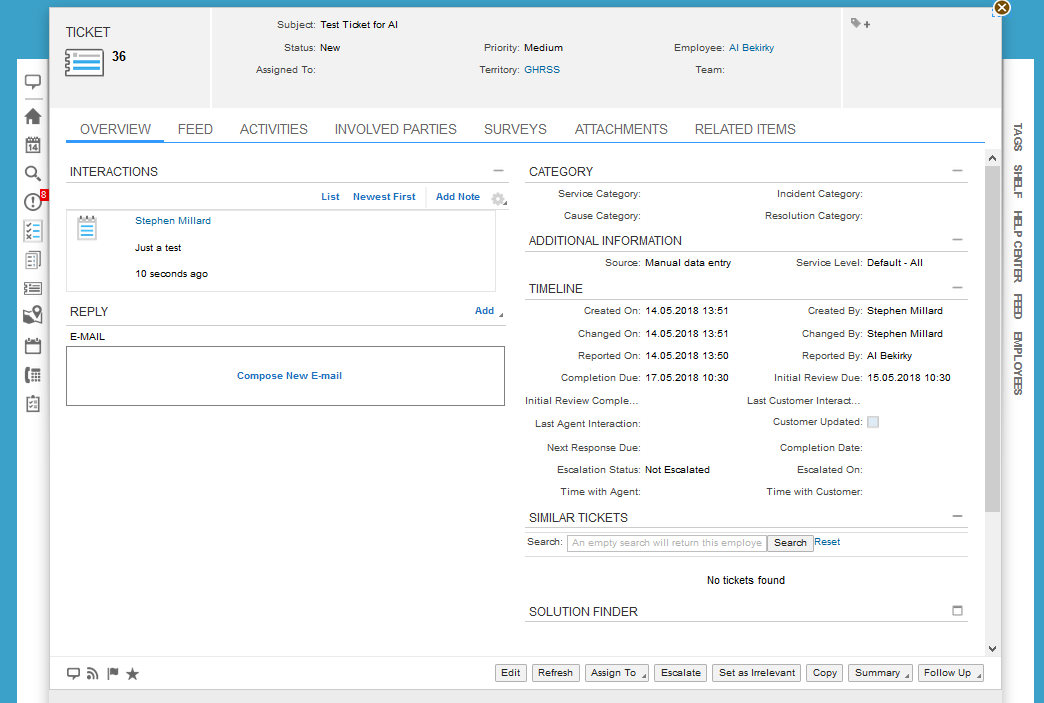 Once the purge has run, the ticket is automatically updated to be assigned to the dummy employee record: 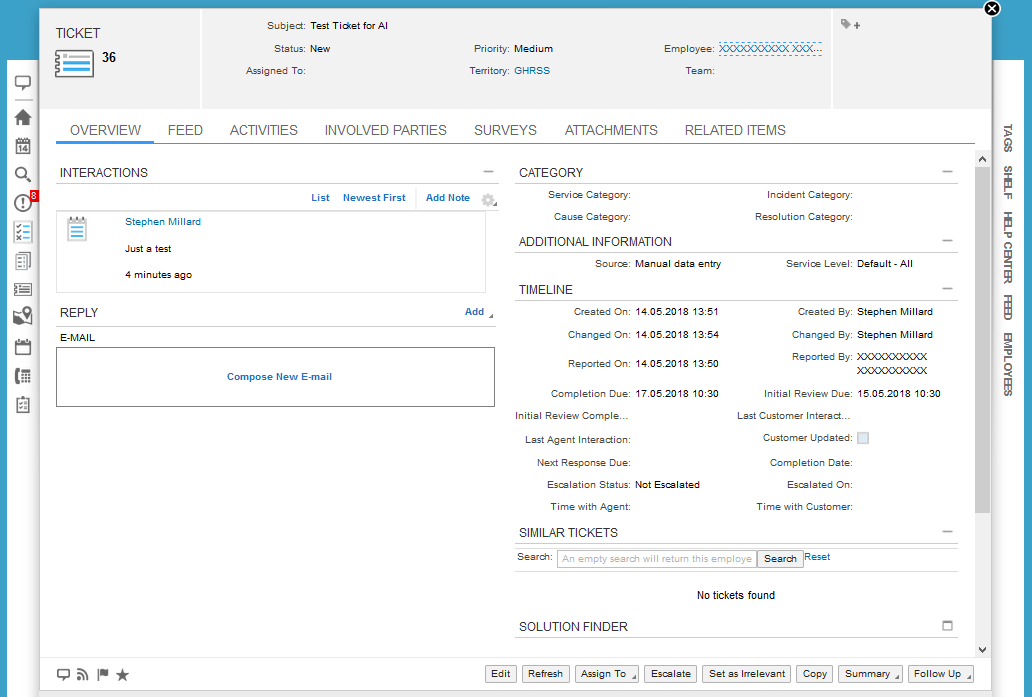 While the application of machine learning to C4C service is still relatively new, SAP is pushing hard having deployed the first aspects of Ticket Intelligence at the end of 2017. This functionality allowed for a base level of ticket categorisation. With this latest release that is being enhanced to support multiple levels of categorisation from the service catalog.

Also, SAP has included a Run Readiness feature that allows customers to check if they are in a position to run with machine learning support for particular scenarios.

There are a couple of things to point out that may put a bit of a dampener on things. To make use of machine learning, you need to have gathered at least a year of tickets in your system, and you must also be using the enterprise edition of C41. Since ECSC is still relatively new for most organisations and the majority will be running against a professional rather than enterprise edition license, this is likely to be available to very few ECSC using organisations straight away.

There is also a new Similar Tickets Recommendation driven machine learning function that is in beta testing with this latest release. It is quite similar to the existing manual search for similar tickets, but with this function, the machine learning algorithm returns a subset of tickets for the service agent to review based on information gleaned from analysing the ticket. 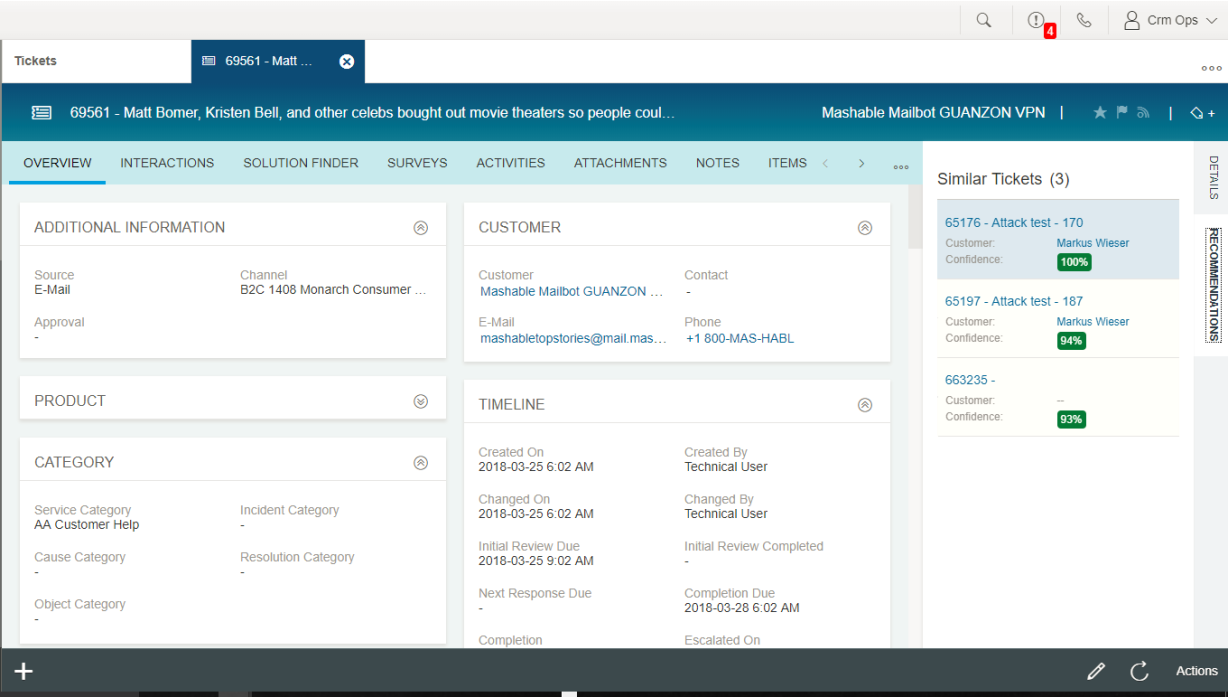 However, it looks like this enhancement is only available to Responsive User Interface (RUI) users. More on that at the end.

Overall the machine learning functionality looks to be developing nicely, and it is only going to get better over time. I’m looking forward to seeing how SAP develop their capabilities in the future to support managers and supervisors with insights (predictive escalation scoring, recommended actions, estimates on time to ticket resolution) and in supporting employees through more natural language based interactions.

Ask HR has received some useful updates in this release. For anyone considering a global deployment, the use of new role-based permission to determine who gets the Ask HR link is good to see.

Before this, we deployed Ask HR as a tile for staggered global roll-outs and used permissions to determine who received the tile. Now while this sounds almost identical the thing to note is that the tile is only available on the SuccessFactors home page whereas the Ask HR link is available on every SuccessFactors page. Therefore this change has a significant advantage.

Another improvement is the option to set ticket attachments as ‘Internal’ within C4C and thereby not display them within Ask HR. This functionality is useful for those occasions where a service agent wants to store some reference material or private response with a ticket, but not make those details visible to the employee

The Fiori principle designed Responsive User Interface (RUI) continues to be rapidly developed with the inclusion of new standard themes (Belize & Belize Dark) and many of the new areas of C4C functionality being available only in that user interface. Unfortunately, it still simply isn’t ready for use in employee support scenarios such as with ECSC.

I pressed SAP on this, and from the response, it looks like RUI will be fully ECSC compatible in the final C4C release of 2018. It’s a real shame this is taking so long, but it isn’t just employee support. Administrative activities such as page adaptation is also still an HTML5 interface (only) activity. But the destination is in sight, and by the time it comes around, there will be so many RUI only features (past, present and future) to take advantage of I’m sure any lag in getting this to customers will be forgiven.

Once again GDPR stands out as a development focus for SAP and the remaining updates are good, but nothing is startling. I’d hoped that this would be the promised employee support compatible release for the RUI; alas it was not, but at least SAP has now been more forthcoming with a timeline.

With GDPR behind us by the Q3 release I’m cautiously optimistic we’ll see some more interesting developments in the ECSC space, but I guess there could still be some fallout from GDPR that might occupy SAP for the summer months.