Back in the Workflow days, the iOS app allowed for the triggering of IFTTT actions via a special Workflow recipe action trigger. While it worked, I actually found it quite cumbersome to configure. As a result I switched to using the IFTTT web hook trigger for triggering IFTTT actions. It turns out that in the move to Shortcuts, the app that Workflow evolved into, support for IFTTT was dropped, so I figured I’d share how to do the web hook triggering as that’s still viable.

With the deprecation of the IFTTT integration, actions for things like updating Google Sheets spreadsheets (something I’d used) was somewhat left out in the cold, and while technically, you probably could still interact with many of the services directly if you learn and implement various API integrations, the whole point of IFTTT is that it provides a layer of abstraction. This in turn allows for automations where all you have to do is learn how to interact with IFTTT and IFTTT will then take care of communicating with other web services on your behalf.

As mentioned above, the key is to make use of the IFTTT web hook trigger. Once you have your special web hook key for your IFTTT account and the name you give to your web hook trigger you can post a URL to act as the trigger in your recipe.

As I also noted above, I found this more straight forward to implement that the standard Workflow action, and here’s a quick example using Shortcuts, IFTTT web hooks and Pushover (a push notification service) to illustrate how to set this up.

The screenshot below shows the IFTTT recipe. The first key point to note is that this is associated with a web hook event I’ve named “smile”. Secondly, note that you are able to include content that is sent in the POST payload from Shortcuts. These are shown in the message area as Value1, Value2, and Value3.

Within the shortcut shown below, you can see that we start with a simple URL of the format https://maker.ifttt.com/trigger/{event name}/with/key/{web hook key}. I’ve blurred my key out in the screenshot for what are hopefully obvious reasons, but you can see the name of the event being triggered is set as ‘smile’. A Get Contents of URL action is being used to POST data to the web hook URL, and a set of three data items have been included as JSON in the payload - corresponding to the values specified in the recipe above. 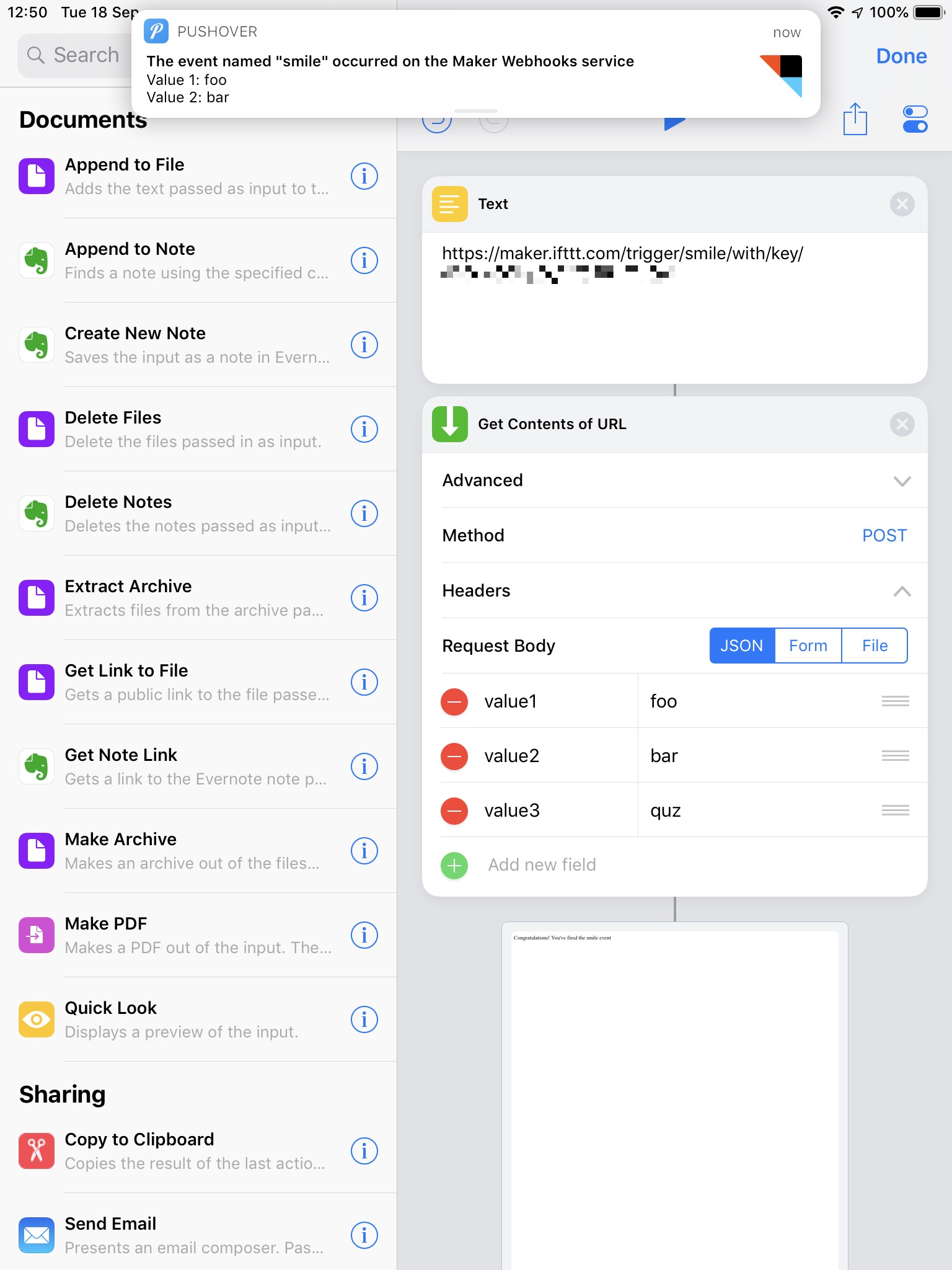 When the shortcut is run, IFTTT acts as the middleware layer to my PushOver account, and you can see the resulting PushOver notification appearing on my iPad, along with the details from the payload.

While this is certainly just a simple example, it highlights just how easy it is to still utilise IFTTT using Shortcuts as a trigger. You’ll also find that other web platforms such as Zapier, Flow, Stringify and Integromat also offer web hook integration, so these services are equally as accessible.