In the final release of 2019, SAP are bringing quite a few useful updates to their SuccessFactors HR helpdesk solution. These range from speed and efficiency improvements through to significant enhancements of existing functionality. It’s a release that introduces something for every Employee Central Service Centre user, be they a service agent, a service manager, or an employee.

There are more C4C enhancements than I’d expected in this final release of the year given that this release is the one where the HTML5 user interface is disabled (along with the familiar blue crystal theme) and parity in the Fiori user interface is reached. At least the parity has been the plan, but whilst we’re now seeing things like embedding of analytics appearing in the adaptation options, I’ll be delightfully surprised if absolute parity has been achieved first time.

Regardless, business needs continue to move on, and some development resource has obviously been steered towards some areas that are of benefit to service management use, and in particular service for employees. We’ll kick off with a new enhancement to tickets.

A couple of changes to interaction types are available in this release. Both Portal interactions, and a new Internal Memo interaction will allow service agents to enter rich text content rather than simply plain text. While this allows for things like changes to the font and typeface, emphasising of text through colouration, and easy use of bulleted and numbered lists, the big difference I think this will make is that these interactions can now include working hyperlinks. This is going to make it much easier for the employee to act on information sent through by the service agent.

For new implementations, the use of internal memos versus notes will simply be a case of only enabling memos as it provides a super set of functionalities when compared to notes. For existing implementations, access to old notes is almost certainly a requirement, so before enabling memos, there should be a discussion to ensure that having both available concurrently is appropriate.

The ticket overview page has had a big update that brings several visual enhancements and layout changes intended to make key information more immediately accessible and actionable. I like it a lot. SAP have done a really good job here of surfacing the data and of course you can tailor it through adaptation to make it exactly suit your organisation’s needs. 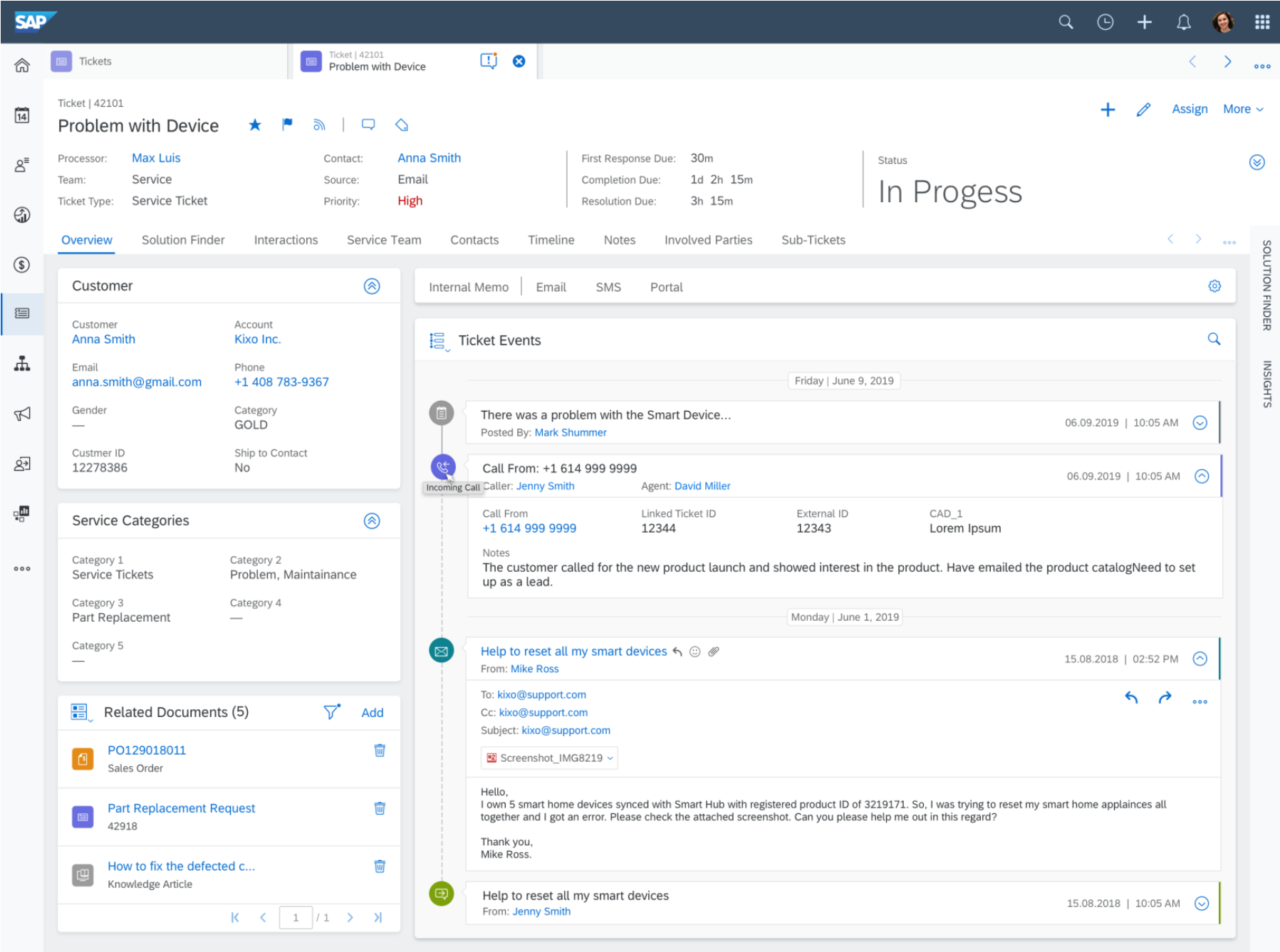 A big part of this update, both in terms of functionality and in proportion of page estate is the ticket timeline view. The view provides a list of the events associated with the ticket and some details about that event. The new timeline view layout is phasing in over the next few releases and provides, like many of the more recent C4C user interface changes, a card-based layout of information. As with other card-based updates the aim is to make them more interactive than the usual tile and table interface elements, and as you can see from this screenshot, the interactions are plentiful.

One enhancement I’ve certainly been asked about in the past is colour coding tickets based on criteria other than ‘Immediate’ priority tickets being flagged as red. In this release SAP take a step forward on this allowing colouration based on a range of ticket priorities. Additional colouration options for specifying a custom colour for each priority is expected in a later release, and hopefully over time we’ll see ways to introduce additional ways to colour code tickets based on things such as service level agreement (including time to breach), ticket types, VIP and escalation status, etc. 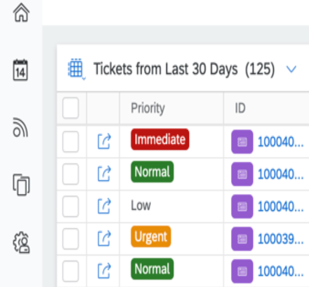 As you may recall from previous releases, SAP have been beta testing inline editing of datasets; a way in which lists of C4C objects can be updated within a listing without having to open and save each one. A real boon for staff responsible for managing ticket allocations for example. Beta testing has gone well, and this functionality is now included as standard. In its place, SAP are now moving on to beta testing mass dataset editing.

Mass editing mode creates a new data entry row in a table listing. Updates are entered into the row and are then applied to selected rows within the table. Very nice, and I suspect that’s also going to be quite useful during project test scenarios, so I’ll certainly be very happy to see that come into general release next year.

There’s also a new Quick View in beta test with this release that allows quick edit options. I’m not sure how often that will be used in comparison, but removing friction improves efficiency so it certainly can’t hurt.

E-mail functionality has had quite a bit of attention in this release with improvements around e-mail branding, signatures and previews.

##Home Page There are a couple of card enhancements coming in this release.

The first is a further update of the caching enhancement. In an effort to improve load speed, SAP began caching card data, but this had a knock-on effect of meaning that the data could not be trusted until it had refreshed. But how would the user know what was cached and what was up-to-date data? Well quite simply, they couldn’t. With this latest release, there will be a visual indicator to show when the cards are refreshing after load to address this oversight.

For those who are using them, this release also brings with it greater filter options. Notably, territories, employees and service agents are on the supported objects list.

As with every C4C release, analytics gets another set of upgrades.

Second, in app desktop analytics will support an examine option on rich text fields that will allow the rich text content to be viewed in a pop-over box. This will be useful for those wishing to include the newly enhanced portal interactions or internal notes in a report.

Excel exports have better support, or probably more accurately, have been fixed, to ensure that formatted fields such as dates and currencies retain their report formatting upon export.

Finally, there are sets of gesture-based enhancements for navigating reports on mobile devices.

The big news for me this release is that Ask HR has finally been updated to show e-mail updates (including attachments). How this has taken so long to be included in version 2 I can’t begin to fathom, but presumably it must have involved some rather complex shenanigans to bring about; I’m simply glad we do have it at last.

The list of tickets in Ask HR will now also include the ticket ID which will be useful for employees who must raise multiple, similarly named tickets. Having the unique identifier visible at the point of selection can save the user time and so leads to an improved experience for the employee.

The ticket display has also been reworked to split the ticket content across three tabs. Ticket Information, Conversations, and Attachments. This should make it quick for users to navigate whilst also reducing the volume of data being retrieved and rendered when the ticket is selected.

I suspect that previous enhancement is one of the more significant load performance improvements made in this release, but SAP are continuing to refine the experience and have apparently made improvements not only on the display of ticket information, but also on the ticket creation and contact information pages as well.

For those who do a lot of ticket filtering, you may have reported an issue with categories on the initial page load. This is resolved in this release.

Overall, I’d definitely say that there was more in this release than I’d expected. There are some solid improvements to existing functionality, some new features that don’t just make things look nicer, but really deliver on helping users be more efficient and productive with the system. With mass dataset editing in the pipeline and due for release next year, I think that this release wraps everything up nicely for the end of 2019.

Looking ahead to 2020, we’ll obviously see SuccessFactors shift to a twice annual rather than once a quarter release, so Ask HR isn’t going to be updated as regularly.

However, Ask HR at the end of the day is really just a user interface to the C4C data, with some SuccessFactors integration woven in. Less frequent updates are unlikely to make much difference in terms of aligning with C4C releases, but I do hope that the longer development cycles will give SAP the opportunity to offer more customisation options for the app.

Beyond the culmination of the Fiori shift, this year’s theme has undoubtedly been one of speed and efficiency. I expect SAP will continue to develop the system along those lines, but I wonder if the new year will bring a re-focus on the more experiential aspects of the system given SAP’s overall HR re-focus for this latter part of 2019. I’m certainly looking forward to seeing how they might bring that to bear on Employee Central Service Centre.