What is a Stream Deck?

There are currently three core models of Stream Deck available. Each is distinguished by the number of keys it offers.

In addition there is also a subscription service that permits you a virtual Stream Deck on a mobile device, called, Stream Deck Mobile.

The physical devices connect via a cabled connection to your computer (I use my Stream Deck with both a Mac and a PC). The device you connect to then runs Stream Deck software that allows you to configure and also update the Stream Deck display. 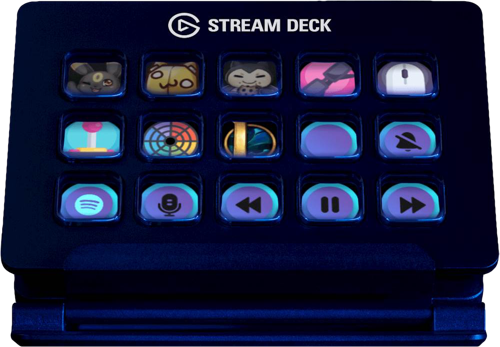 Each key can be configured to do a variety of things. At a basic level, they can open a particular file or URL, or playback a series of timed key strokes. This makes it very useful for streamlining workflows, and sounds very similar to the sort of functionality that Keyboard Maestro provides. In addition, you can set keys to open folders allowing for an additional level of key configurations layered beneath, or a similar switch to a different profile which loads in a different set of keys. You can even install plug-ins that allows software and services to interact directly with the Stream Deck software and extends the functionality further. This includes working with services such as Spotify and Hue lights as well as software like Keyboard Maestro, or streaming apps, which is what it was originally conceived for, like WireCast.

The Stream Deck software can also monitor what app is active and switch profiles automatically. I have this set up for certain “key” apps on both Windows and Mac, but in general, I manually switch profiles to match the type of area I’m working on at that point in time.

The Stream Deck I opted for was the standard 15 key Stream Deck. I did so for the following reasons.

I was primarily using this on Windows, and rather than loading all of my key press combinations into the configuration file, I used the Multibow variant to generate some layout switches, and AutoHotKey to actually drive all of my operations, as I then didn’t have to keep swapping cards in and out to update the Keybow. 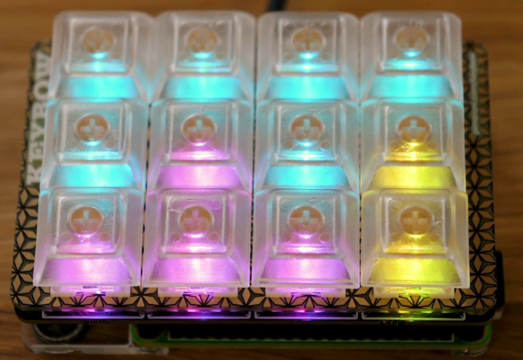 While it feels great in a tactile sense, and it worked well, I found that I had so many things tied to keys in different layouts, I wasn’t using all of them regularly enough for them to become muscle memory, and the colours simply weren’t enough to remind me about what button did what action in what layout.

The Stream Deck was the next logical choice in that regard.

On my Macbook Pro, I use Better Touch Tool to customise my touch bar, and again, this shares a lot of similarities with the Stream Deck. It will vary between applications, and I can use it to trigger things such as Keyboard Maestro macros, give me some visual feedback, etc.

While the Stream Deck is practical much of the time, there’s a lot to be said for having the touch bar as it is built in and so always there. I know many power users are not fans of the touch bar, but I find it very practical and the option to have a dynamic palette of tools I think is very good.

Both provide good visuals and are versatile in what they offer, but the tactile feel of pressing a physical button and the ease of set-up I find make it a bit easier to configure and work with than the touch bar, but I do make good use of both, and of course I can use the Stream Deck on devices that don’t have a touch bar.

I have not been tempted to try the mobile solution. It isn’t designed to run on an iPad, and it requires a subscription. My physical Stream Deck easily meets my needs given I can travel with it, but if it were a non-subscription app, I would absolutely consider investing in it. For now I can use Alfred on my Mac and the Alfred Remote app to trigger Keyboard Maestro and have automations carried out accordingly. The Stream Deck software provides better flexibility and would afford me similar functionality when using my work PC, but as it stands this simply does not justify the mobile subscription cost for me.

Stream Decks are not an essential piece of kit, and they are not exactly cheap either. I’d actually say that if you just want to try out having extra keys to automate with, pick up a gaming keyboard with extra keys (I use a Logitech G910 in my home office for my work PC, but you can get simpler and cheaper models), or a Keybow like I started with.

Once you reach a point where a Stream Deck is something you could make use of, take some time and choose the one right for your requirements - they could well be very different from my own. Many people have multiple Stream Decks using things like the mini to switch profiles on the XL, so that may be something to consider too. Once you have your Stream Deck, do also look through the available plug-ins and try them out. You can even find some other ones online that aren’t in the app plugin listing, but obviously you might want to check them out a little before installing them.