One of the new features in the new Apple beta OS releases that people seemed to have had some confusion about are Tab Groups. This is a way that users will be able to store sets of tabs for later loading. I have a brief theory I’d like to share about the use of this feature.

The consensus I have seen seems to be that this is just another way of bookmarking. Many people have noted that they don’t see a particular use for it as on the desktop Safari handles tabs and windows well enough that you can just have multiple windows open with different sets of work. 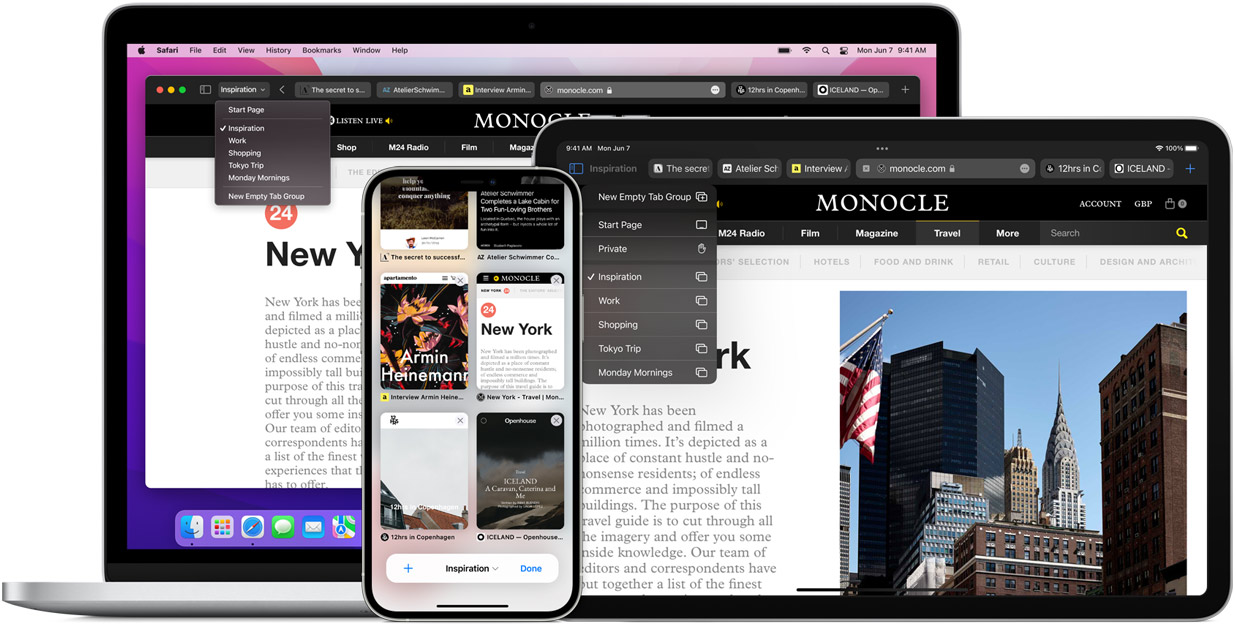 The Influence of Version Control

My theory is that it is of more use if you take a modern developer approach to it, and by that I mean with a bit of inspiration from distributed version control. The most common of which is git.

When managing code through a version control system such as git, there is a concept of branches. Branches are entire copies of the code base that allow you to work on duplicate code copies branching from any point in the historical tree of version control for the code. The use of this is to allow you to work on and merge back in independent features as well as allowing you to quickly switch between different sets of code to carry out activities such as maintenance and bug patches. Being able to switch branches is a core part of how a large proportion of today’s developers work, and version control also branches out (intentional pun) to other areas such as document management, data set management, journalism, project management, and many more. i.e. it isn’t just commonplace to the domain of developers any more.

Being able to switch back and forth on branches with relative impunity is one of the most powerful features in modern version control, and gives huge peace of mind to a great number of developers and other users.

The Influence of Contextual Computing

Contextual computing is something that has been discussed since at least the 80s, and certainly as a serious topic in academic circles as far back as the mid-2000s. It is the idea by which a device is able to adapt its utility to support the activity being done.

In many ways, computers have always done this. It is just that as end users, we have only actively sought to do what we have been told that the computer will do. In recent years, the rise of the smart phone and pervasion of machine learning into our lives means that we are starting to ask more of our devices and expect our devices to be able to adapt to our needs.

The goals of contextual computing is for the computers to take information about what is going on and to be able to offer or enact what is needed, when it is needed, rather than relying on the user to explicitly instruct it. However, we are in a transitional period where there are, more or less, equal parts of this depending upon the device and the nature of the activity.

What has this got to do with tab groups in Safari? Well, think of it as something to support context switching. It may not be as important on the Mac at first glance, but let us begin with the iOS. The phone has only one Safari window. We can’t group related tabs into difference windows, so being able to switch to a different tab group, a different context, I something that tab groups will enable on the platform. As a device that is practically always with you, being able to context switch on that device is a key step forward. Being able to switch between checking the latest news and sports web sites on a morning commute to some corporate research while waiting for a stand-up meeting to start is a valuable addition.

On macOS, because the tab groups are sync’d, this allows you to quickly load in a group you may have been viewing on iOS, and vice versa. It is where the value of the broader platform comes into play.

Before you ask, this is equally true for iPadOS too. But, I view its Safari feature set as sitting somewhere between iOS and macOS, and so is effectively covered by the view of looking at the extremes of the other two operating systems.

What Does This Mean?

While this is far from the biggest change that Apple will be releasing in 2021, I do think it is a great addition. I think that it is something that some people will grok immediately, I suspect that for many it will pass them by entirely. Then there will be a middle group who have an “a-ha” moment where they pick up on the benefit of being able to switch in a contextual way. To switch their working branch in their browser and not have to worry about losing their place or even the context between tabs.

I think Apple have a slow burner with this one, but at some point, a great number of us will wonder how we ever really managed without it.