The Badger 2040: Building a Physical Badge

I recently wrote about getting set up for working with a Pimoroni Badger 2040, a small piece of hardware that functions as a programmable eInk badge. The basic unit is the electronics, but in order to make it a functional badge for my own purposes, I found there were a few additions required. In this second post in my introductory series of posts for the Badger 2040 I am going to briefly set out what other physical elements have been added.

When I ordered my Badger 2040, I splashed out an extra £8.50 for Pimoroni’s accessory kit for the Badger 2040. The kit gave me a AAA battery holder with a JST connection (along with 2 AAA batteries), a Velcro square for attaching a poser source to the back of the Badger 2040, a lanyard (made from recycled plastic bottles), and a USB C to USB A cable. 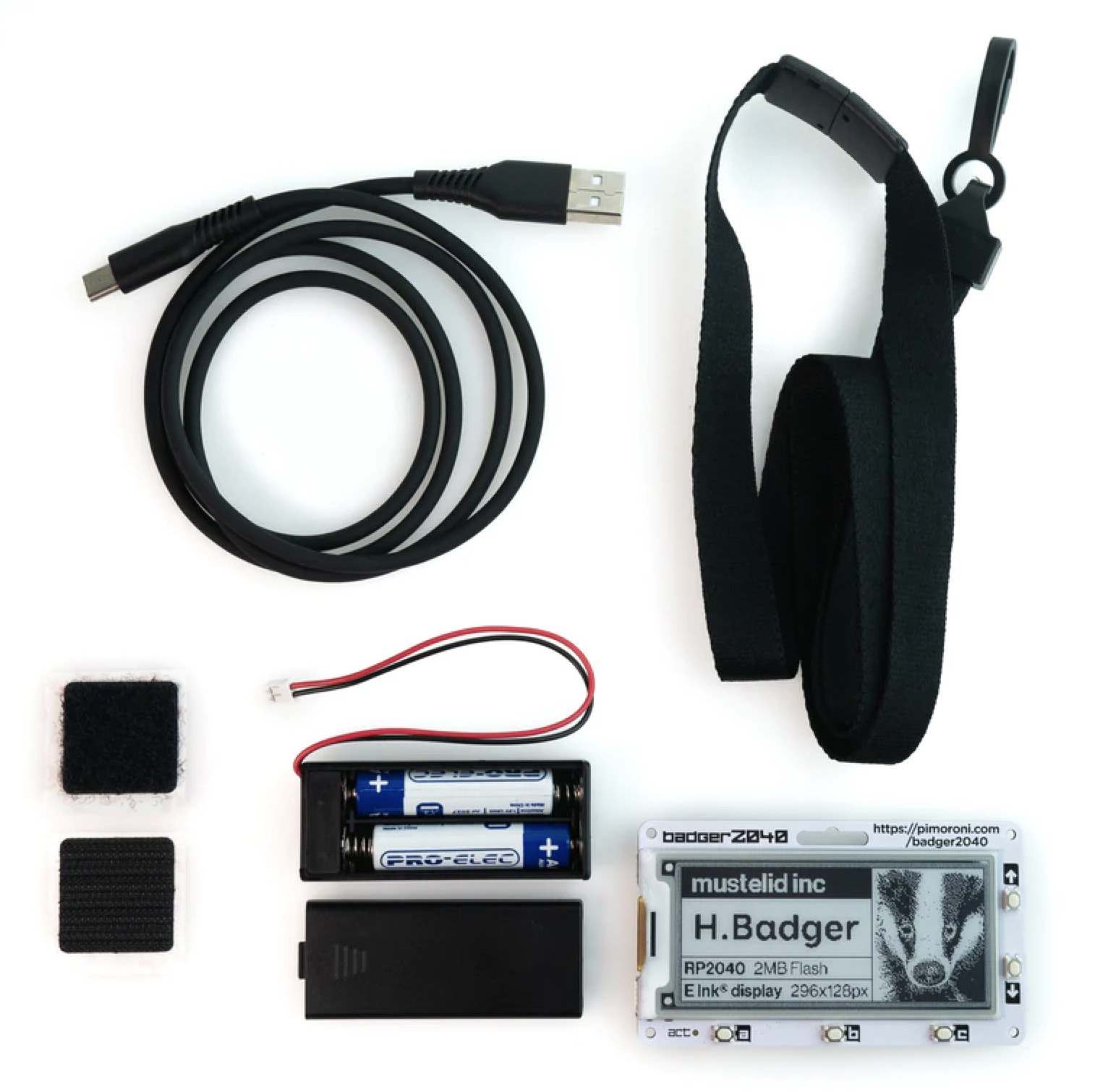 These were great for playing around with the Badger 2040, but ultimately I wanted to use this as a “real” badge. As a result, the only piece I continue to use is the Velcro square - which you could purchase more cheaply. I would potentially use the lanyard as well, but it is a fixed plastic pivot and I have a work branded lanyard with a pivoting metal clip which is of much higher quality and honestly looks a lot better.

The first change I wanted to make was to switch to a less bulky power source. Having a AAA battery pack slapped on the back of the Badger 2040 was not going to make it a comfortable wear - though the advantage would be a power source that could be quickly switched and would last a long time.

I decided instead to switch to a slimline battery unit that could sit flush against the back of the unit. For this I selected a 500 mAh LiPo battery pack with a JST connector, again from Pimoroni. It was with this that I then used the Velcro square to provide my on the go power solution.

There are a few things to be mindful of with this approach. 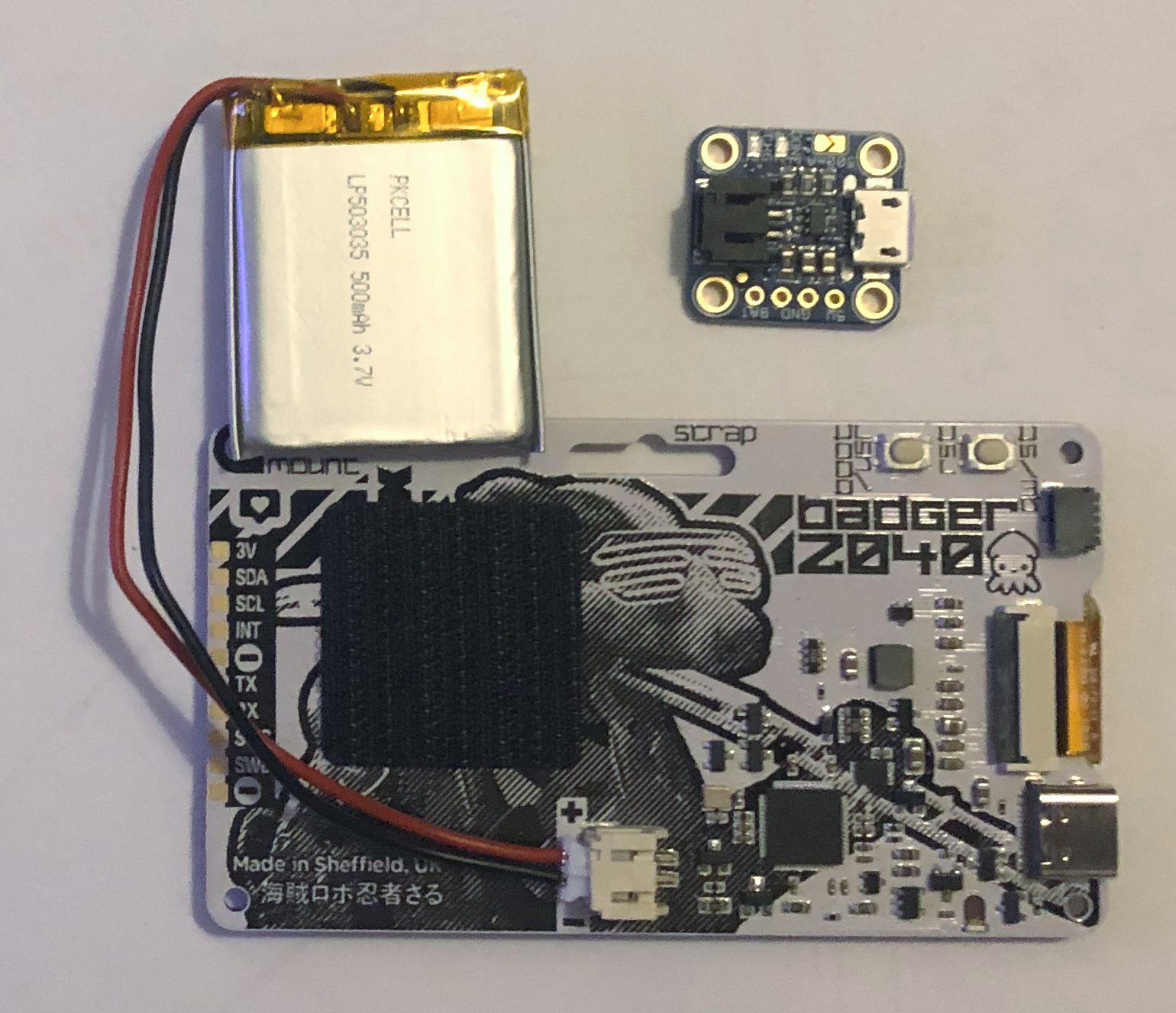 On this last point, the Pimoroni tutorial includes a link to the 3D printing files for a perfectly functional back plate.

I’m not big on 3D printing, but I do have an Easythreed X1 printer that was easily capable of producing this print in the course of a few hours. Since that one was release, there are several others that have appeared too, so I would suggest having a look around and see what’s out there, or you could even design your own if you have 3D modelling skills.

The last thing I did was to add a magnetic badge attachment to the back of the back plate. I am not a big fan of lanyards generally as I find they tend to get in my way by dangling across keyboards, wash basins, etc.

If I am wearing a suit, the badge can mount sturdily using a magnetic clasp without distorting the shape of the suit. The same is true if I’m wearing one of my thicker material, higher quality, formal shirts. But not when it is a thinner cotton one as this drags the entire shirt down where the badge sits. The suitability therefore can vary, but in those circumstances I have the use of a lanyard as my fall back.

The weight of the magnetic attachment is negligible compared to the weight of the other main components (the Badger 2040, the battery and the back plate), and the metal plate used for attachment adds little to the overall thickness. 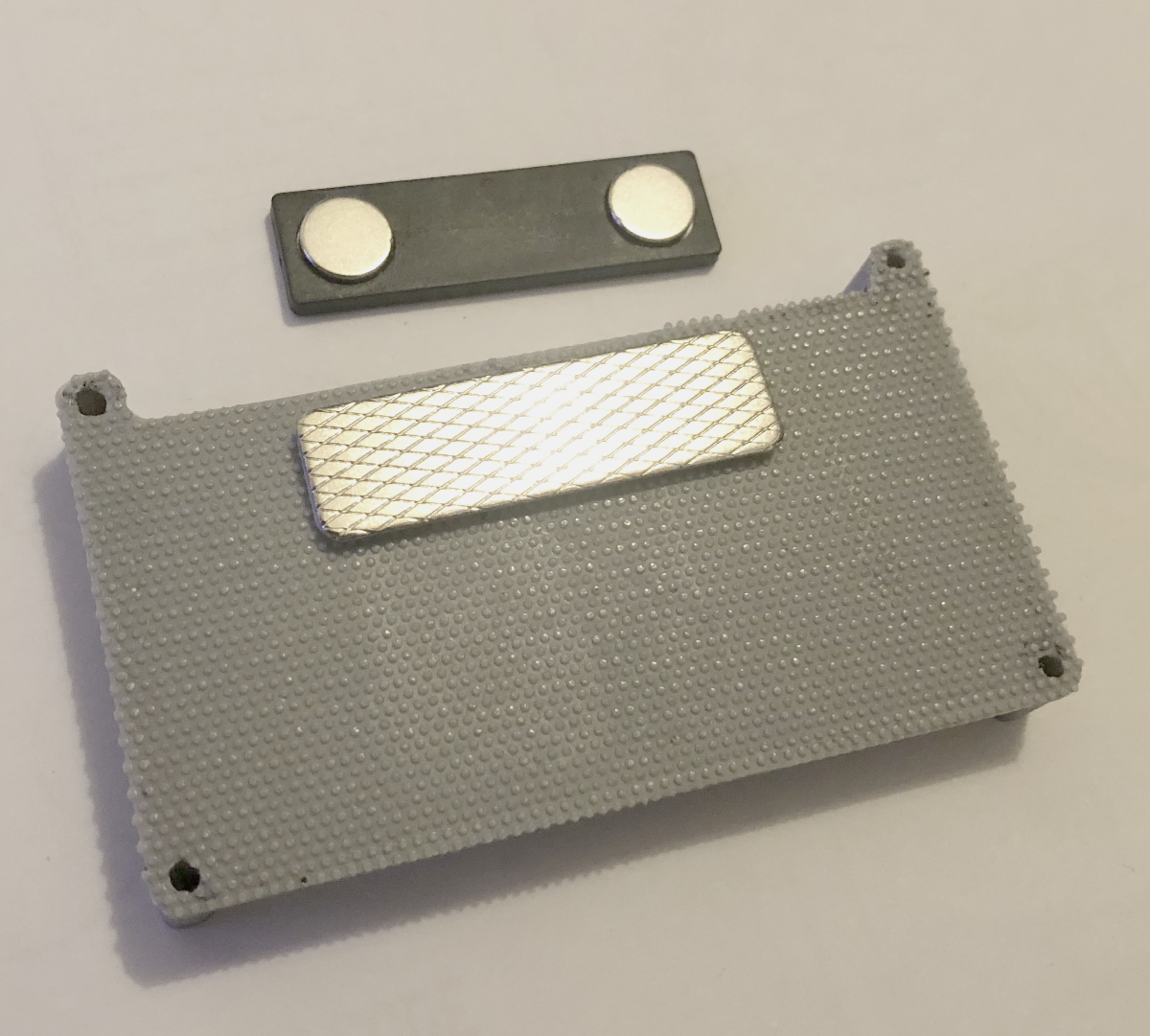 One thing to be aware of is that this sort of badge attachment should never be used by someone who is fitted with a pacemaker as it could interfere with that device’s normal operation.

Once constructed, the Badger 2040 makes a neat package. As I mentioned above, I think this is very much at the practical limit in terms of depth for me. If you don’t need the ability to operate the Badger 2040 on the go and are happy just to pre-load and display static content, then you could get away without an onboard power supply and you could attach a much thinner back plate. It is on my list to have this exact set up as an alternative. I also think I could probably get away with shaving a millimetre or two off the corner posts of the backplate to make the existing badge fractionally thinner. 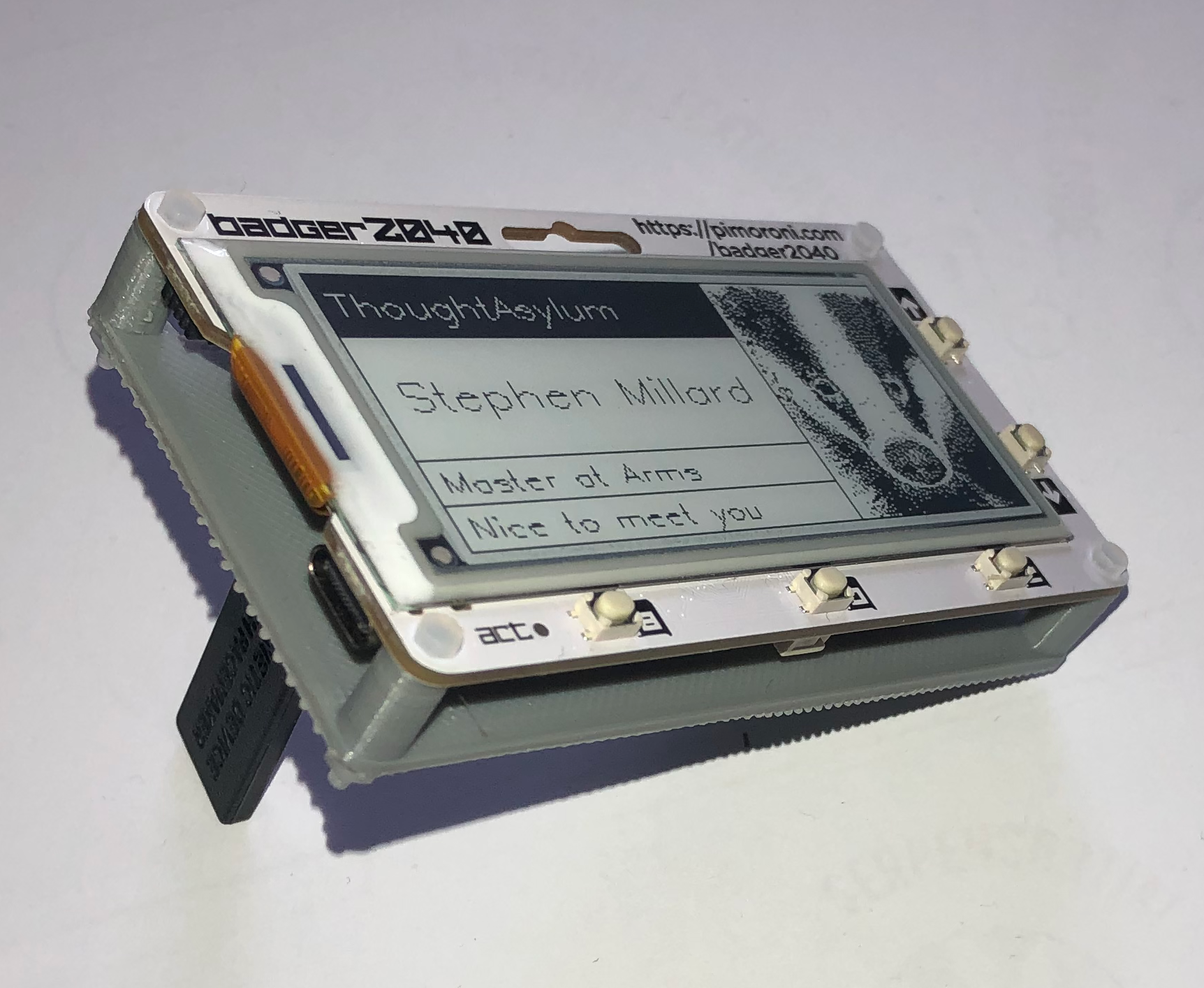 In the third and final post in this series, I’ll be looking at the software side of things and how I have configured my Badger 2040 to be my badge for different occasions.