At Thursday’s technical community event I had a little experiment involving QR Codes and Microsoft Tags.  We have information up in our office meeting rooms about how visitors may access our wireless network.  We have an alphanumeric access key and I used this as the basis for my little experiment.

Next to each of the sets of instructions I put four images - each encoded the wireless key for the wireless network. 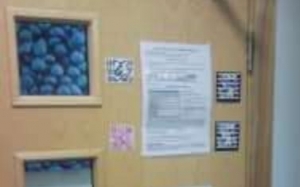 Notably the two QR codes were radically different in structure even though the content was the same.  Something I may look into further as I thought that QR codes should follow a standard encoding algorithm.

The aim of the experiment was to see how many people in this community (who had discussed QR codes at previous meetings) would spot and use the codes - at least just to see what they were.

With three sets around the room on the backs of all but one door I was expecting a bit of interest or someone to ask what they were for … and then get a little bit of pre/post meeting discussion about what these encoded images could be realistically used for (as there’s only a small benefit in encoding the network key - reduction in typos if you’re connecting your phone to the wireless network).

Through the whole day I heard no discussion and saw only one person snap an image - the purple QR code.

So it looks like the codes are still not pervasive enough in Western society to immediately cpature many people’s attention.  I think coloured QR codes are probably going to be the best way to grab people’s attention initially, but until (/if) it really gets embedded and on every mobile phone as standard it looks like it might be difficult to generate a huge amount of interest - even amongst technical people who have shown an interest in it.