Anyone who has been following my efforts over the last few months may have noted that I have occasionally made reference to migrating from Evernote to DEVONthink. As part of that move I have been taking the opportunity to sort out some of my lax filing. One of those aspects is the naming of files and specifically the inclusion of date stamps where relevant - e.g. on bills, documentation releases, etc. Fortunately I was able to bring a little bit of automation to bear on this activity, which has been helping speed things up significantly.

When I did my initial import from Evernote, using DEVONthink’s inbuilt import feature, it brought across the creation timestamps for the file attachments that then appear as separate items in DEVONthink. In the vast majority of cases, the cases I can automate, I want to use that date in the item’s name. The question you may be asking is why? After all, that information is already in DEVONthink.

The reason is that it helps me sort, organise and find files both within DEVONthink, and outside of it if I am doing any batch file processing or sharing on. Date stamping is often a useful addition to file management.

My personal recommendation is to prefix a file with the date stamp in the format “yyyy-mm-dd “. This allows for quick and easy chronological based sorting, and the use of hyphens as separators allows me to do things like search for things like matching months or days (e.g. “-07-“ would be a search for July, and “-01 “ a search for the first of any month).

Fortunately, DEVONthink comes with a wealth of AppleScript scripts and an extensive AppleScript dictionary all ready to provide access to a huge amount of DEVONthink’s functionality. Inclusive within this is a way to interact with and update items stored in DEVONthink.

The script I came up with processes as follows:

Many scripts both in DEVONthink and online focus on working with the current item, but I was really keen to work on batches of files (usually identified through a prior search), and so the processing of a selection rather than the currently viewed item has been absolutely core to the speed of processing improvement this automation has provided me.

I saved the script to the following file path:

This then makes the script available via DEVONthink’s script menu. 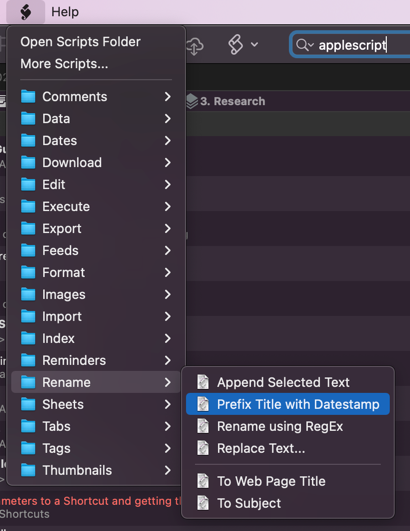 While I am using this a lot, I have also tied it to a keyboard shortcut via Keyboard Maestro, but you could use any number of Mac automation tools to do this, including making a Quick Action (née Service) using Apple’s macOS inclusive options of Shortcuts or Automator, and then associating a keyboard shortcut with that via the Mac’s keyboard preferences.

Being able to speed up my renaming has been great, and for the thousands of files I apparently have, this is going to have saved me hours of time, improved my accuracy, and stopped my mind going completely numb. It isn’t a particularly involved or complex automation, but t is often these smaller automations which are used frequently that can make the biggest impact on your computing time.

Even if you do not need to incorporate date stamps into your DEVONthink use, maybe you have other batch processing needs where you could adapt the script above. My advice is always to give it a go. Do let me know over on Twitter if you found this useful, or if you have adapted it in some way for your own batch processing use.