A brief struggle from 'No Go' to FroYo

It’s been some time since I had a phone upgrade but yesterday I finally got a new phone. In fact this phone is very new for me as it is running an operating system I’ve had no prior experience with - Android.

The phone I bought was an unlocked HTC Desire running Android 2.1 (Eclair) but just a few days ago Android 2.2 (FroYo) was released in the UK for this phone. Unfortunately the press a button update I expected didn’t quite pan out that way. 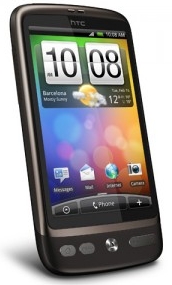 Android phones can receive over the air (OTA) updates to the operating system and this is what I expected to receive. Rather than wait for the automated system to kick in and FroYo the phone I thought I’d try the manual trigger:

However I was a little disappointed as the phone popped up a message that no updates were available. I persisted with this over the course of a day and a half until finally resigning myself to the sense that my phone might be in a very long queue to receive the update or worse yet perhaps somehow have been made exempt.

After a bit of Internet research I found a GeekWord article (based on the discussions in an XDA Developers forum discussion) that provided instructions on how to upgrade the phone manually by downloading the firmware and saving it onto the phone’s memory card and then an arcane system of key presses to apply it. I held my breath and diligently followed the instructions. Everything went well though I was a little apprehensive when after rebooting the phone it went through at least two or three update cycles with nameless symbols on screen. In the end though the update was applied. 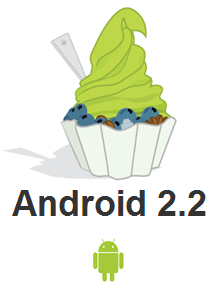 That isn’t quite the end of the journey. I had a quick tour round of the things I’d already set-up and some of the new features. It quickly became apparent that whilst I was able to connect to my home wifi network, I had lost my 3G connectivity.

The SIM I was using was from my old phone and had been working on the previous version of Android. I looked though the phone settings until I found the Access Point Name (APN) settings.

The carrier for my current SIM is Vodafone and I note that whilst the contract Internet option was listed it wasn’t selected. So I selected it and then retried my 3G. It still didn’t work so I returned to the Access Point Names and opened up the settings to see if I could see anything wrong. I was fortunate in that I’d set up APN settings for Vodafone on some work smart phones in the past so I quickly realised that the entries that the update had filled in were rather unfamiliar.

A quick search on Google revealed a site listing APN settings for a range of UK carriers and after a quick entry of the Vodafone settings I retested and regained my 3G connectivity.

So now I have a nice new phone with a nice new up to date operating system and I can still access the Internet. A little bit fiddly, but hopefully worth that extra effort.